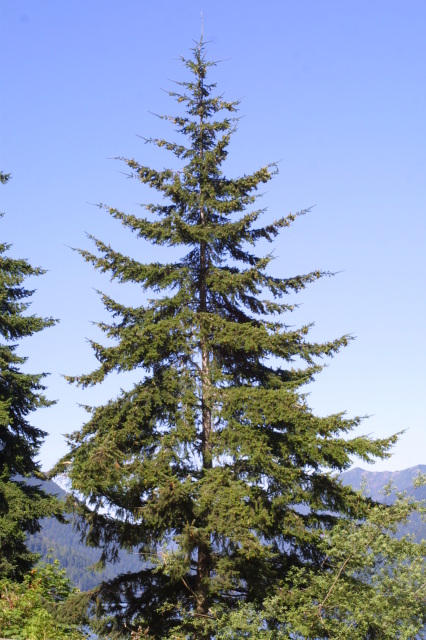 Use the drop down button below to select the quantity
Add to Cart
Douglas-Fir is one of the worlds tallest trees in coastal areas of Oregon, Washington and British Columbia. The current tallest is the Brummitt Fir located in Oregon standing at 99.4 metres (326 ft) tall. A century or so ago much taller specimens existed are are estimated to have stood up to 120m (393) feet before falling victim to the foresters axe.

With good weed control it establishes quickly and soon becomes very fast growing with annual growth up 1.2m (4ft) quite possible. Grows to it best development on alluvial soils in sheltered valleys but also performs well on freely draining rocky or sandy soils in higher rainfall areas which are neutral or acid. It does not grow well in calcareous soils.

This is one of the most important timber trees in North America and Europe. Douglas-fir wood is used for structural applications that are required to withstand high loads. It is used extensively in the construction industry.

Douglas-fir is also one of the most commonly marketed Christmas tree species in North America, to make them much fuller and bushier they are usually trimmed to a near perfect cone.

150 years of logging in British Columbia have reduced the ancient forest which used to stretch uninterrupted from the seashore to the high mountains. When the old growth forests are felled they are replaced with even age plantations which lack the diverse forest structure. Astonishingly most of these last remaining fragments of ancient forest have no legal protection from the Canadian government and groups such as the Ancient Forest Alliance are fighting to protect the last remaining areas of old growth forest in British Columbia.

Seeds of the Douglas Fir are relatively easy to germinate and grow. The dormancy within the seed is short and easily broken. This is achieved by a short period of cold stratification in the fridge. You can do this by first soaking the seeds in water for 24 hours. Fully drain away all of the water and place the seeds in a zip-lock freezer bag.

Place the seeds in the fridge, it is important that during this period that the seeds do not dry out or are waterlogged otherwise the pre-treatment will be ineffective. After between 4 and 6 weeks under these conditions the seeds are ready to be sown. In general, the seeds will fail to germinate unless treated in this way, simply sowing untreated seeds in compost at room temperature will not break down the dormancy and germination will be disappointing.

Fill your chosen container with a good quality general potting compost. Suitable containers could be plant pots, seed trays or plug trays or even improvised containers with drainage holes. Firm the compost gently and sow the seeds on the surface. If you are sowing in plug trays, sow 1 or 2 seeds per cell.

Cover the seeds with a couple of millimeters of vermiculite or failing that a fine layer of sieved compost. Follow with a gentle watering and keep them at room temperature.

Germination will begin a few weeks from sowing. The seedlings are reasonably robust and trouble free and usually grow to a height of between 5 and 12 cm in the first growing season depending on the sowing date and cultural techniques. Densely sown seedlings are at risk from fungal diseases such as “damping off” which can cause rapid loss of many seedlings.

Developing seedlings should be fine in full sun, keep them well watered and free of competing weeds.

Growth will accelerate rapidly in the second and subsequent years and the developing young trees should be re-potted as necessary preferably during the dormant season. After perhaps 2 years they are ready to be planted in their permanent position.

This species will grow very large, very rapidly so plant it well away from buildings, power lines, etc.